Dimitar: Me and Yasen are musicians – we actually met in the music school in Plovdiv and quickly found out that we both have a passion for making games and other challenging technical projects. That is when the two of us co-founded our startup studio The Sixth Hammer.

Fast-forwarding to 3 years ago when we started gathering team for our biggest project so far – Moo Lander. Currently our team is international with people from Europe, Asia, North and South America. We have 17 very talented and motivated people in our game team (artists, level designers, voice-over artists, VFX programmers, etc..) – most have worked for at least a year during the different development stages of Moo Lander.

Yasen: We started doing games with a couple small mobile projects back in the days when we were at school.

We created 3-4 games for ourselves – we did the concept, the art, the gameplay… and the promotion. And this is why the games didn’t had success – we did not know anything about marketing and promotion back then, ha-ha.

Dimitar: We also got the opportunity to create games for clients here in Bulgaria – my personal favorite is Spatium – something like Guitar Hero but in space – it was very challenging game and it felt amazing every time you beat your high score or hit a big multiplier.
Unfortunately, I think that currently all of the games are unpublished now because we haven’t updated them in years. 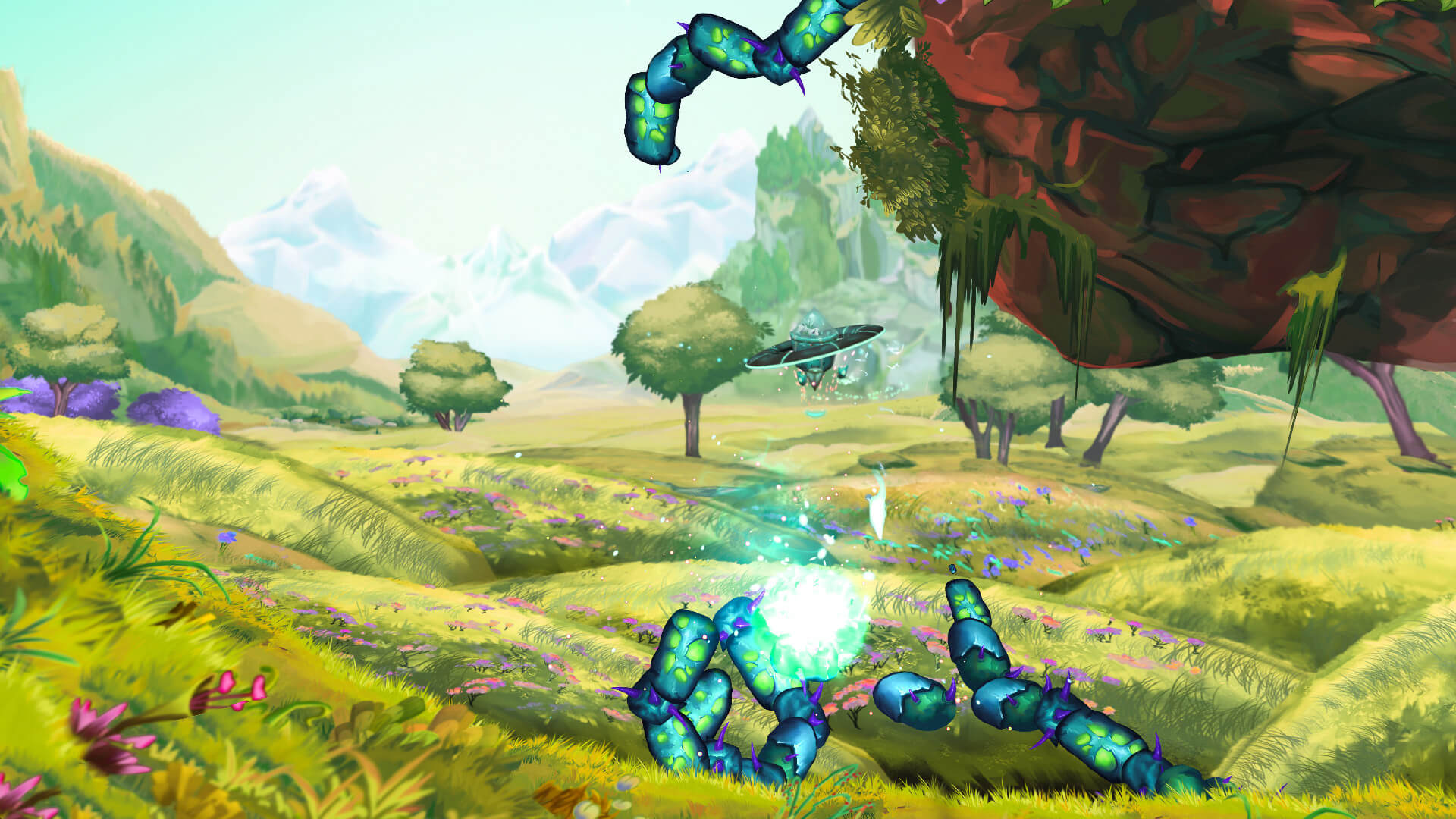 Yasen: Moo Lander is a 2D adventure platformer with Metroidvania and RPG elements, featuring an epic story about cows, milk and ancient civilizations.

The highlight of the gameplay are the Mighty ancient cow battles! The cow brain is powered by a sophisticated AI, enhancing the boss battles with lightning speed reactions. The player will encounter different cow species – each with unique set of deadly abilities.

You will develop your ship’s tactical and combat abilities and then further customize them with the help of unlockable upgrades, so you can make your own unique combat build.

We also have a couch co-op multiplayer for up to 4 players with different PvP and PvE modes on vastly different maps. And yes, of course that you can play as a cow!

Dimitar: Like with most of the big things, the idea for Moo Lander came to us spontaneously – the idea of Moo Lander was born in a small café in Plovdiv 7 years ago. We were talking about making a great game, that we could play on our Android smartphones (there were quite a few interesting games for mobile back then). We did not have much experience back then so we couldn’t make it as well as we wanted. We made quite a lot of other games during those years, but through all that time the idea was shaping clearer and clearer in our heads.

Then three years ago we played the game Ori and the blind forest. We were fascinated by the immersion and amazing art of the game – we wanted something like that for Moo Lander. Then we decided to start again, but this time do it professionally – gather a team, prototype a lot, validate as much as we can and leave only the most exciting elements.
The current idea and those fast-paced, epic & hilarious cow bosses are the result of all of those years of planning and validation with other fellow gamers.

Dimitar: We envisioned and created the best …and only… cow artificial intelligence in a game. You will be surprised by the ways our cows will attack you while dodging your desperate attempts to land a single hit.
The whole concept of creating an epic world around the funny concept of cows and milk is quite unique for our game. We also have mechanics and abilities that we have developed for Moo Lander and have not seen in a game before.

Yasen: We have been working on the game for more than 3 years now. We spent the first year in prototyping and validating the gameplay with users and then we continued with the production of the actual game.

Dimitar: We faced quite a lot of challenges during those years. First one to gather the correct team (especially the artists). We got lucky with that and found just the perfect people.

The pacing of such a large game is another big challenge – you need to introduce the new ideas and concepts in the game in such a way as to simultaneously not be boring, but not be too crowded or confusing as well.

Also we did not want any text hints during the campaign – we wanted the users to feel the enjoyment of discovery while they explore the alien terrain of Moo Lander. So we had to do a lot of level-design in order to introduce all the necessary information for them in an invisible way within our game world.

Yasen: Calibration of the asymmetric multiplayer was a near-impossible thing (one team playing as the Landers flying a spaceship, the other one with cows, running on the ground) – but I believe we are pretty close now. People are really enjoying it on the game conferences and the statistics show us we managed to balance the winning of the teams in the game to almost 50:50 in the long run. 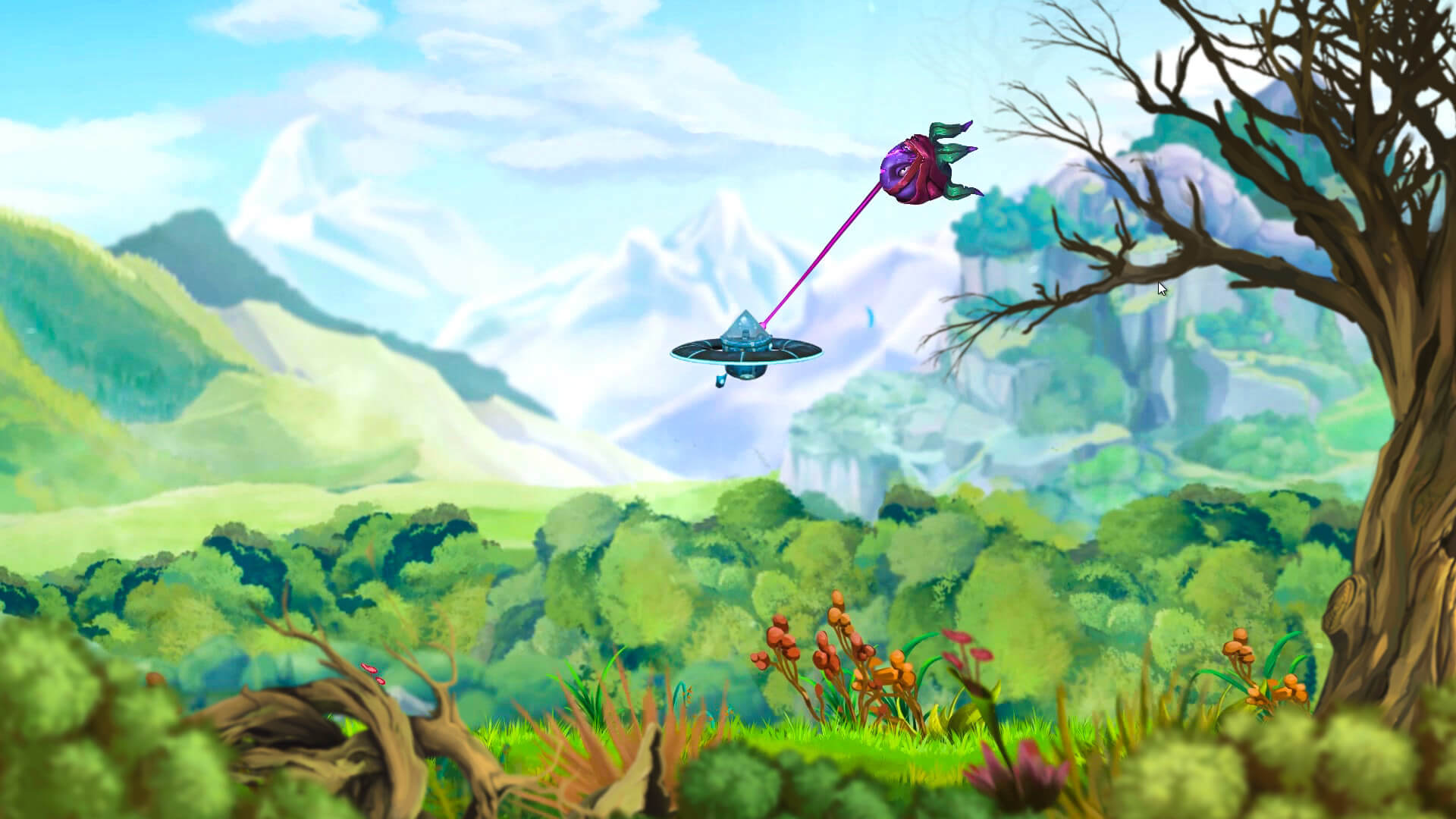 Dimitar: We have thought about it, but again luck helps us by providing us with enough clients so we can work on a second job and self-fund the development of the entire game.
But with the development already almost done, ahead now lies the biggest future challenge for us – marketing and how to reach the target audience of Moo Lander. That is why we are trying to find a potential partner for helping with that so we can do the marketing the right way.

Yasen: Game-wise we already have a big DLC in the works for Moo Lander with the story, concepts, art, level design and partial prototypes already done. We also have plans for future games and interesting concepts we want to explore and present to the world.
But we are not limited to only games – we have ambition to expand in other technology sectors as well, exploring new innovative ideas that are already partially developed.

Dimitar: Our aim is to release Moo Lander in the Fall of 2021, but currently we cannot give the exact release date.

While you are waiting for the full release you can try the free demo on Steam that showcases some of the singleplayer action and both PvP and PvE multiplayer modes for you and your friends!